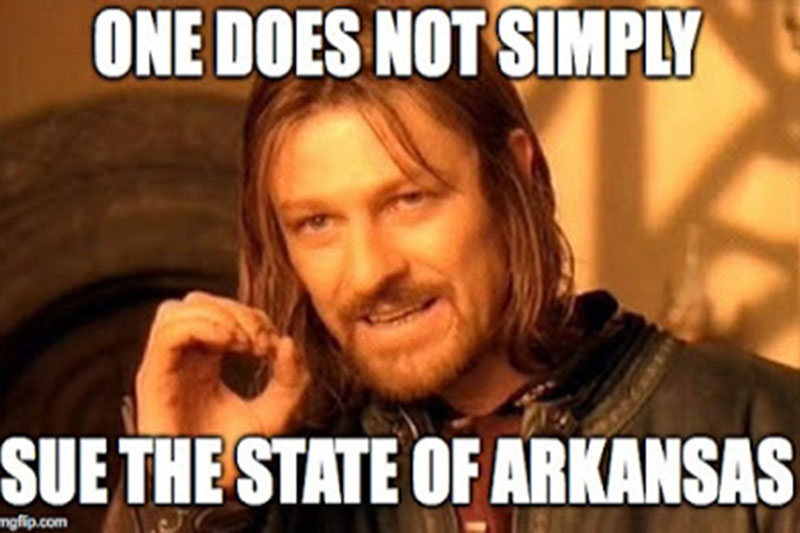 It's Good to be King. Arkansas Sovereign Immunity Wins Again...

The Arkansas Supreme Court made itself abundantly clear in a new opinion rendered this week. As stated in Arkansas Community Correction v. Barnes, 2018 Ark. 122, the Court clearly meant its prior holding in Bd. of Trs. v. Andrews, 2018 Ark. 12, 535 S.W.3d 616: you simply cannot sue the state of Arkansas.
So, I guess it really is good to be king.  This week's victim: The Arkansas Whistle-Blower Act.
Here's some background:
In Andrews, the Board of Trustees of the University of Arkansas argued that it was immune from suits for claims filed against it under the Arkansas Minimum Wage Act based on the doctrine of sovereign immunity. Andrews, 2018 Ark. 12, at 2-3.  In Andrews, the Court held that the Arkansas General Assembly cannot waive the State's immunity, and any statute providing that the State could be made a defendant in a lawsuit goes beyond the scope of the legislature's power.
The Arkansas Supreme Court reached this conclusion by interpreting the Constitution "exactly as it reads", finding that the "drafters of the current constitution removed language from the 1868 constitution that provided the General Assembly with statutory authority to waive sovereign immunity and instead used the word 'never.'" Id. at 10-11.
Quick civics lesson: The constitution trumps legislative action.
The unconstitutional law in Andrews was the Arkansas Minimum Wage Act.  The AMW Act is not the only offending law. Andrews foreshadowed the ultimate demise of numerous laws enacted by the legislature that gives private citizens the right to sue the State. A number of these laws involve actions taken by administrative agencies. Andrews may not have expressly ended the life of each of these laws, but the Court placed them on notice.

The decision in Barnes resulted in a fatality-style victory for the State.  This week's victim was the Arkansas Whistle-Blower Act.  In Barnes, the Arkansas Supreme Court confirmed that Andrews was not a fluke.  The Court wasn't kidding--you really cannot sue the State of Arkansas.  Since the Whistle-Blower Act (like the Arkansas Minimum Wage Act) allows one to "claim injunctive relief, reinstatement, compensation, and attorneys fees" under Ark. Code Ann. 21-1-605 (Repl. 2016), it expressly authorizes a right of action against the State, which is prohibited by the Arkansas Constitution.

More concerning than the unconstitutionality of these laws is the unfortunate reality that Arkansas citizens, who once felt protected under the Arkansas Minimum Wage Act or the Arkansas Whistle-Blower Act, have no right of action against the State, even under the text of the laws that were designed by the State to arguably protect public employees from wrongful and retaliatory behavior.